For the measurement of the current-voltage (I-V) characteristics of bifacial solar devices, different measurement procedures have been proposed in the IEC technical specification (TS) 60904-1-2 [1], which has been recently published. The purpose of the TS is to quantify the bifaciality of the bifacial devices in a standardized way. This article gives an overview of the procedures and a comparison of the different procedures for bifacial solar cells and modules.

The technical specification covers indoor and outdoor measurement procedures of bifacial solar devices. In this article, we will focus on indoor measurements with solar simulators, which represent the majority of applications in test laboratories and in production lines. Two different procedures have been proposed in the TS and are outlined in the following. From a variety of measurement procedures, which have been discussed in entry a previous blog, those two have been assessed as the most significant ones. They should be carried out in addition to conventional I-V measurements at standard testing to quantify the bifacial performance of the bifacial device.

The bifacial device is thereby illuminated with an irradiance of 1000 W/m2 from front and simultaneously with a reduced irradiance in the range of 100 and 200 W/m2, respectively, from the rear. 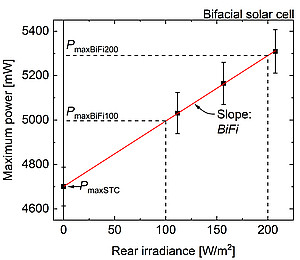 Figure 1: Maximum power Pmax as a function of rear irradiance Erear of an exemplary bifacial solar cell measured with both-sided illumination. A constant front irradiance of 1000 W/m2 and different rear irradiance levels have been used for this purpose.

As different types of setups are applied for the measurements, the rear irradiance levels may vary slightly from facility to facility. To provide comparability -also with other types of bifacial devices–, standardized parameters are determined from this diagram. A linear fit to Pmax as a function of Grear should be carried out.

The TS thereby specifies that only the slope of the linear fit should be used as a fitting parameter, the intercept of the Grear axis should be set to PmaxSTC. The slope of the linear fit is a measure for the power gain of the bifacial device caused by additional rear irradiance and is referred to as the so-called parameter BiFi. Additionally, the interpolated maximum power values PmaxBiFi100 and PmaxBiFi200 at rear irradiance levels of 100 and 200 W/m2, respectively, should be determined.

Realizing both-sided illumination often involves constructional upgrades of the solar simulators by e.g. installing rear light sources or mirror systems. Furthermore, for some approaches for contacting bifacial solar cells, it is not possible to simultaneously illuminate the rear of the cells. The TS therefore proposes an alternative measurement procedure, which is based on single-sided illumination. This procedure is also known as equivalent irradiance (GE) method. Initially, the front and rear I-V characteristics at STC under single-sided illumination are measured and the bifaciality coefficients φIsc and φPmax calculated from the ratios of rear to front short-circuit current and maximum power, respectively:

These parameters quantify the bifaciality of the bifacial device and depend i.a. on the technology used for producing the device. For high bifaciality, φIsc and φPmax are close to unity. It is important that a non-reflective cover or measurement chuck is applied for the measurement to minimize contributions of transmitted and reabsorbed light [2, 3]

To account for the additional current that would be generated by rear side illumination, the front irradiance is increased to above 1000 W/m2. This means that further front side I V measurements need to be performed with equivalent irradiance levels

φ thereby is equal to the minimum of φIsc and φPmax and serves as weight for the rear irradiance Grear. In accordance with the first measurement procedure outlined in the previous section 1.1, Grear values in the range of 100 and 200 W/m2 should be used. The bifacial cell shown in Figure 1 exhibits a bifaciality coefficient φ of 63.2%, i.e. a rear irradiance of 100 W/m2 for example corresponds to an equivalent irradiance of 1063.2 W/m2

In the technical specification 60904-1-2, both measurement procedures are presented as consistent. However, intrinsic differences between the two procedures could arise from the different photogeneration depth profiles due to front only and both-sided illumination. This can be critical for bifacial solar cells and modules with e.g. injection-dependent recombination or inversion layer shunting [4]. Moreover, on module level, current mismatch between different cells under rear illumination or partial shading of the rear by the junction box, cables or module frames could lead to differences between the two methods [5, 6]. This also means that there are effects which can impact bifacial solar modules and are irrelevant for solar cells. In the following, a comparison of the two methods is therefore given and it is particularly distinguished between solar cells and modules.

To the authors' knowledge, only few studies on the comparison of the two measurement procedures for bifacial solar cells have been published so far [8, 9]. Within this project, further measurements have been carried out to evaluate the consistency of the procedures on solar cell level [4].

I V measurements of bifacial passivated emitter and rear (PERC) solar cells with silicon oxynitride/silicon nitride (SiOxNy/SiNz) rear surface passivation have been carried out. The SiOxNy/SiNz stack features a high density of positive charges which leads to an inversion layer at the rear of the cell. The inversion layer is shunted at the local aluminium-alloyed contacts. This so-called inversion layer shunting introduces an injection-dependency [10] of the rear passivation and particularly affects the solar cell characteristics at low irradiance levels. This can for example be seen by the bifaciality coefficient φIsc shown in Figure 2. The bifacial PERC solar cells investigated within the project are therefore adequate and challenging test devices for the comparison of the two measurement methods.

Figure 2: Measured bifaciality coefficient φIsc for the bifacial PERC cell investigated in this project. The solar cell exhibits a strong non-linearity in Isc,rear at low irradiance levels which originates from injection-dependent inversion layer shunting at the rear.

The I-V characteristics of bifacial PERC solar cells have been measured with the measurement procedures with double- and single-sided illumination for different rear irradiance levels. The measured maximum power values are shown in Figure 3. As both measurements have been done at the same setup, the procedures can be compared quite accurately. 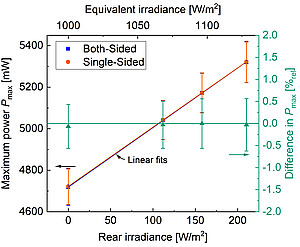 It can be seen that the Pmax values of both methods are in good agreement. The differences between them are below 0.1%rel, which is clearly within the corresponding measurement uncertainties. This leads to the conclusion that the two methods presented in the IEC technical specification 60904-1-2 are indeed consistent for bifacial solar cells with respect to nonlinearity. Further bifacial solar cells -including different production technology- have been measured giving similar results.

The parameters BiFi and PmaxBiFi100 and PmaxBiFi200 have been determined for both measurement procedures by fitting a linear relation to Pmax as a function of Erear (see Table 1). All parameters are again in good agreement. Please note that the derivation of the corresponding measurement uncertainties will be part of future work.

Table 1: Summary of the standardized parameters determined from linear fit to Pmax as a function of Grear for one non-linear bifacial PERC solar cell.

For bifacial solar modules, there are effects influencing the I-V measurements that do not exist for bifacial solar cells. If for example the placement of the junction box is directly taken over from monofacial modules without specific adaptions, partial shading of strings from the rear side can occur (see Figure 4).

Figure 4: Exemplary picture of front (left) and rear side (right) of a bifacial solar module (picture taken from [11]). The name plate and the junction box lead to permanent shading of several strings on the rear side.

In addition, sorting of cells according to front I-V parameters only for the module assembly can lead to current mismatch between different cells under rear illumination. Figure 5 shows I-V curves of two different modules measured from front and rear with standard testing conditions.

Modules A has been optimized for bifacial application and shows no conspicuous features in its I-V curves. The I-V curve of module B, however, exhibits notches due to partial shading or current mismatch, which leads to the bypassing of strings by the bypass diodes. 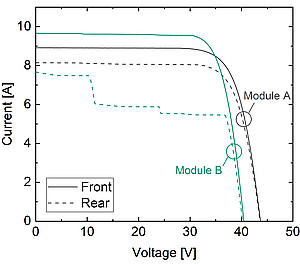 As a result of the notches, the bifaciality coefficients φIsc and φPmax are very different for module B (Table 2). For module A, both coefficients are approximately similar. For the determination of the equivalent irradiance according to equation (2), the smaller of the two needs to be used.

The I-V parameters of the two modules have been measured with the measurement procedures with double- and single-sided illumination for different rear irradiance levels (Figure 6). It can be seen that the two methods agree well for module A with deviations in Pmax of less than 0.2 %rel. For module B there is a significant difference between the two methods of 2.9 %rel. Due to the notches in the I-V curve, the bifaciality coefficients and also the equivalent irradiance levels are underestimated. The GE method with single-sided illumination leads to the measurement of too small Pmax values. 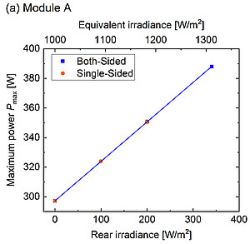 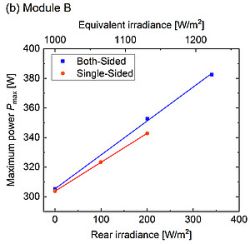 The evaluation of the bifacial parameters for both modules is summarized in Table 3. Whereas the parameters for module A show very good agreement with deviations below 0.1 %rel, the difference is 15.9 %rel for BiFi and 2.4 %rel for PmaxBiFi200 for module B. Table 3: Summary of the standardized parameters determined from linear fit to Pmax as a function of Erear for two bifacial modules.

For bifacial solar cells, all measurements have proven consistency of the two methods so far. Therefore, both measurements can be used for quantifying the bifacial performance. For bifacial modules, the measurement procedure has to be chosen more carefully. Where as good agreement between the two methods has been shown for modules adapted to bifacial application (e.g. by correct placing of the junction box or current matching of the cells for rear illumination), non-adapted modules with severe distortion of the rear I-V curve can exhibit significant differences. For these modules, the measurement under real bifacial illumination is recommended to assess the correct I-V curve for realistic operating conditions. In the GE method with single-sided illumination as presented by the TS, the effects of partially shaded rear side are not taken into account correctly. Nevertheless, by implementing few amendments to the GE method, it is possible to realize good accordance between both bifacial and GE methods, also for modules with distorted I-V curves.

More details on these amendments can be found in [12].