Measurement of the linearity of photovoltaic devices

The linearity of a photovoltaic (PV) device is generally perceived as proportionality of the photocurrent and the irradiance. A deviation from linearity, i.e. the non-linearity of a PV-device can manifest itself as poor low-light behavior and can have a significant impact on energy yield of a PV-system. Therefore, the knowledge about the non-linearity of a PV-module can be of major interest for PV project planners and PV yield modeling. The IEC standard 61853-1 and 60904-10 describe the procedures for such linearity measurements.

This article gives an overview of the measurement procedures and setups currently available or under deployment for linearity measurements.

The explicit determination of the non-linearity of a solar cell is an integral part of the differential spectral responsivity (DSR) measurement [1,2,3] since the DSR must be measured at different bias irradiance levels to calculate the absolute AMx spectral irradiance responsivity and the short-circuit current under Standard Test Conditions ISTC and at any other irradiance ISC(E). Currently the state of the art DSR facility can only calibrate devices up to mini-module (i.e. one encapsulated solar cell in a module frame). An example for a measurement procedure of a DSR calibration including the linearity test is escribed below.

ISZ(λ,ISZ): Current of the solar cell at the given wavelength and the Bias current .

IMD,SZ(λ,ISZ): Current of the monitor at the given wavelength measured simultaneously to the solar cell measurement.

IRef(λ,ISZ): Current of the reference at the given wavelength .

IMD,Ref(λ): Current s̃of the monitor at the given wavelength measured simultaneously to the reference measurement. 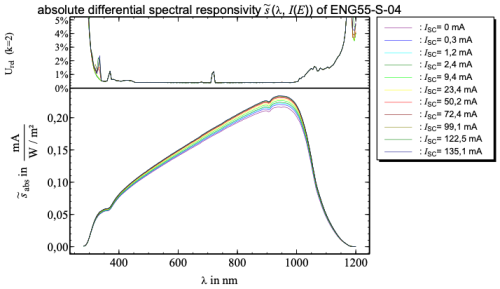 for each DSR curve at given bias irradiance level ISC(Eb):

3. ISTC (or any current ISC(Eb) at given spectrum AMx and irradiance Eb,AMx)can be derived from numerically solving the following equation. 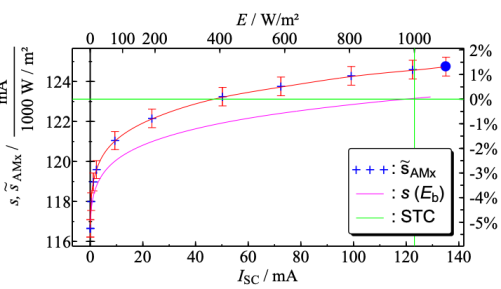 5. The function of the absolute spectral responsivity s(λ,E) at a given irradiance level can be derived by solving the following equation:

The major uncertainty contributions for such a DSR calibration are:

The two-lamp method is foreseen by the standard IEC 60904-10 [4] and it is applicable only to ISC measurement. It is based on the principle that incoherent light produced by two sources (or group of sources) A and B and illuminating a surface sums in intensity according to the equation:

Therefore, for a PV device with ideal linear behaviour the following is valid:

The measurement procedure can then be described as follows:

1.    Set the irradiance level at the upper or lower limit of the range of interest. A RC reading is useful to associate an absolute value to this level, but it is not compulsory at present.

2. Measure Iroom by blocking both sources A and B.

4. Change the irradiance so that:

o in case of decreasing G, the next I*AB is approximately equal to the I*A or I*B of the previous iteration;

o in case of increasing G, the next I*A or I*B is approximately equal to the I*AB of the previous iteration;

The change in irradiance may be achieved by either varying the power to individual sources A or B, inserting attenuation (filters, masks, meshes), or by blocking some element(s) in a multi-lamp solar simulator so that A and B consist in a different number of lamps.

5. When the overall irradiance range of interest is spanned, the percentage deviation from the ideal linear behaviour is calculated according to:

for every irradiance range [GA ; GAB], i.e. for every iteration in the procedure described above.

6. The following data analysis requires the RC reading of the irradiance. In order to calculate the deviation from linearity over the entire irradiance range of interest, a normalisation to the value I(1000 W/m2) is done at first. Then, linear interpolation in this new coordinate system is performed at each Gi, starting from the 1st pair of data and according to the measured Dlin for the specific G range considered. In general:

The following issues can be considered major measurement uncertainty contributions:

The linearity measurement procedure using a solar simulator is detailed in [4]. The method acquires the absolute response of the DUT and can be utilised to investigate all parameters of the IV curve. The irradiance conditions can be controlled by means of neutral density filters, attenuation mask or by lamp intensity. A reference cell (RC) is used to monitor the irradiance during measurements. The following issues can be considered major measurement uncertainty contributions: