Bifaciality of photovoltaic (PV) modules has demonstrated great potential to increase the output power of modules with relatively low additional cost [1]. Bifacial PV modules can potentially increase energy yield of a PV system by 3 – 15 % compared to monofacial PV modules for the same available area. Establishing reliable and international standards that accurately determine the performance of bifacial PV products is crucial for bankability and further penetration of this technology into the market. Low uncertainties in power rating of such products will result in low uncertainties in energy yield estimations of bifacial PV plants, reducing financial risks and increasing trust in bifacial PV technology. The latest technical specification IEC TS 60904‑1‑2:2019 [2] describes the procedure for current-voltage characteristics (I-V curves) measurements of bifacial photovoltaic devices for single-and double-sided illumination measurements.

In production line environments, measurements of conventional solar cells and modules are standardly carried out with single-sided illumination. Therefore, several different procedures based on single-sided illumination have been proposed for bifacial solar devices. The most critical point is the consideration of the additional current that would be generated by illumination of the rear side. Many manufacturers of bifacial solar modules not only specify the front I-V characteristics of the modules under standard testing conditions (STC) in their data sheets, but also the characteristics for additional rear side power gains of typically 5 to 25 %. They do not give details though, whether these have been determined by measurement, extrapolation or calculation with advanced methods. 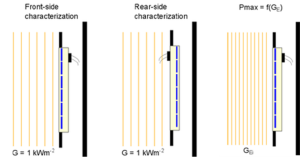 Where φ is the bifaciality factor of the device and GRi is the assumed rear side irradiance levels selected. At least three measurements with different rear-side irradiances GRi are to be conducted and the results interpolated to GR = 100 and 200 Wm-2. The procedure will be described in the next section.

For reporting of the measurement results of the bifacial device, the front and rear STC parameters as well as the interpolated power at GR = 100 and 200 Wm-2 need to be specified. For bifacial solar cells, it is furthermore important to specify the rear contacting scheme in the report, since the conductance of the measurement chuck can significantly influence the measured IV characteristics.

As an additional measurement procedure which is very close to operation conditions of bifacial devices, the I-V characteristics can also be determined from measurements with double-sided illumination. The front side irradiance is set to 1000 Wm‑2 and – similar to the GE method – three different rear irradiances are to be applied, within a realistic range of values. The power of the bifacial device is then interpolated to rear irradiances of 100 and 200 Wm‑2 for acquiring the bifacial parameters. In addition to the front and rear STC parameters, these power values are specified in the measurement report.

Although systems exist that utilise two different light sources (front and rear), such systems can result in more complicated setups, additional requirements for calibration and measurements of multiple parameters (uniformity, spectrum, angular response) and potentially higher cost of measurements (both regarding time and resources). A common approach is using a double mirror system like the one in Figure 2. 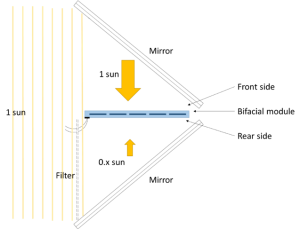 Figure 2: Schematic of a double mirror system approach for testing of bifacial cells or modules

In such a system, a single flash solar simulator is used as a light source. A double mirror system is utilised in order to provide illumination to both sides of the bifacial sample, which is placed between the mirrors appropriately so that the incident irradiance on both sides of the sample is perpendicular to the sample’s surface, as can be observed in Figure 2. Appropriate filters are used in order to set the right amount of rear irradiance. The filters should be calibrated and be uniform. This configuration allows double sided measurements of bifacial samples with a single flash from the solar simulator. A picture of such a system for testing of bifacial cells is presented in Figure 3 [3] and for modules in Figure 4. 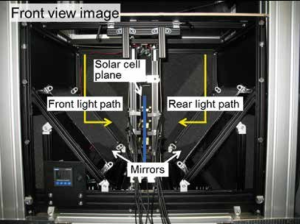 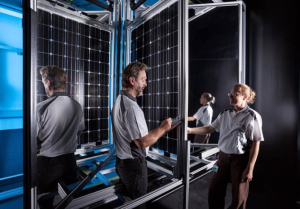 The electrical power of the bifacial devices can furthermore be measured outdoors under both-sided illumination. Similar to indoor measurements, the front and rear IV characteristics at STC (determined with a non-reflective cover on the non-illuminated side) and the interpolated powers at rear irradiances of 100 and 200 Wm-2 shall be reported. A spatial rear non-uniformity of 5 % or better is recommended.

In a recent study, Deline et al. investigated the application of conventional standard outdoor measurement conditions to bifacial solar devices [4]. These conditions are defined in standard IEC 60904-3 and comprise –besides spectral distribution of AM1.5 and front irradiance of 1000 Wm-2– light bare soil as ground coverage [5] which corresponds to an albedo of 0.21. The authors investigated the influence of further conditions not defined in the IEC standard on the rear irradiance and on its spatial homogeneity. They recommended applying single, separated modules at a ground clearance height of at last 1 m for the measurements. Furthermore, by varying the ground coverage, rear irradiances between 0 and close to 300 Wm-2 were realized.

Two outdoor approaches have been proposed for bifacial PV device testing. The first is an outdoor single side illumination with equivalent irradiance levels measurements similar to the indoor method, where the rear side of the module is covered with an opaque black (low reflectivity) cloth or other material. The second method is a double-side illumination with reflective cloth or surfaces in order to change the albedo from the ground as described in the IEC TS 60904-1-2 [2]. Schematics of the outdoor methods are presented in Figure 5, taken from [6].

As described in IEC 60904-1-2, for single-sided illumination measurements of bifacial PV devices, a solar simulator (as defined in IEC 60904-9 [7]) with adjustable irradiance level has to be used for the I-V characterisation. Irradiance levels above 1000 Wm-2 (typically up to 1200 Wm-2) need to be achieved, non-uniformity of irradiance must be below 5 % for all irradiance levels used for the characterisation of bifacial devices. For double-sided illumination a solar simulator with the capability to simultaneously illuminate the bifacial device on both sides must be used. Irradiance at different levels on both sides needs to be provided with the non-uniformity of irradiance being below 5 % on both sides.

In order to accurately measure the I-V characteristics of each side of bifacial PV devices, the amount of light incident on the opposite side of the device under test must be eliminated completely during the measurement by creating a non-irradiated background. The background is considered to be non-irradiating if the irradiance incident on the side that is not measured does not exceed 3 Wm-2, this should stand for the whole area of the non-irradiated side. 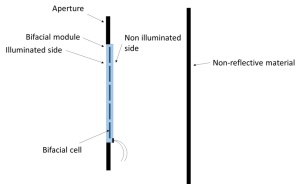 Figure 6: Schematic of bifacial PV module and the required non-irradiated background and aperture

In order to determine the bifaciality coefficients of a PV device, the main I-V characteristics of the front and the rear sides must be measured at STC, using the requirements for the non-irradiated background described above. Using these measurements, bifacial parameters can be defined. The short-circuit current bifaciality coefficient φIsc is the ratio between the short-circuit current at STC generated exclusively by the rear side of the bifacial device and the one generated by the front side(1): [math]\displaystyle{ \varphi_{I_{SC}}=\frac{I_{SCr}}{I_{SCf}} }[/math]

In order to calculate the BiFi parameter, which expresses the bifacial power generation gain, Pmax of the device under test needs to be measured for at least two different equivalent irradiance levels, 𝐺𝐸(i) (𝑖=1,2,3) (a third point is the Pmax(STC) already measured). BiFi is then defined as the linear fit’s slope of the Pmax (i) versus GR(i) data series, with the linear least squares fit forced to cross the Pmax axis at Pmax(STC). Since the resulting curve is a straight line, any non-linearities have to be considered in the uncertainty budget.After calculating BiFi, there are two additional parameters that need to be reported: PmaxBiFi10 and PmaxBiFi20, for rear irradiance levels of GR1 = 100 Wm–2 and GR2 = 200 Wm–2 respectively. It should be highlighted that PmaxBiFi10 and PmaxBiFi20 must be obtained by linear interpolation of the data series Pmax(i) versus GR(i), based on the formulas:

When a double-sided illumination system is used, the GR levels can be set directly by the double-sided system for acquiring the BiFi parameter. Along with the Pmax at STC measurement, Pmax of the bifacial PV device is measured at additional points, with 1000 Wm-2 on the front side plus rear side irradiance GR(i) (i=1,2,3,…), where at least two different values for GR(i) have to be used, with the recommended ones being GR(1)=100 Wm-2 and GR(2)=200 Wm-2. Similar to the single-sided illumination procedure, BiFi is then defined as the linear fit’s slope of the Pmax (i) versus GR(i) data series, with the linear least squares fit forced to cross the Pmax axis at Pmax(STC). Since the resulting curve is a straight line, any non-linearities have to be considered in the uncertainty budget.

Example of Bifi measurements and calculations:

It is assumed that a bifacial PV module is measured using a single-sided illumination system, applying the GE method. The measured values for STC power and bifaciality coefficients are Pmax(STC)=400 W and φIsc=75 % and φPmax=76 %. Using these values, the equivalent GE(i) irradiances can be calculated for selected GR(i) assumed rear illumination. Since φIsc is the lowest value between φIsc and φPmax, it will be used for calculating the GE irradiance levels. Apart from STC conditions, three additional irradiance levels are selected for GR(100 Wm-2Wm-2, 150 Wm-2, 200 Wm-2). For these assumed GR values, the equivalent irradiance GE is calculated according to equation (4). The results for the GE values are presented in Table 1. These GE values are set as the actual irradiance levels in order to acquire Pmax measurements of the module. It is assumed that these measurements yield the results presented in Table 1.

Using these results, the BiFi parameter can be calculated by drawing the graph of GR versus Pmax. The graph is presented in Figure 7. As described earlier, linear fit is applied and the slope of the line is the bifacial power generation gain BiFi. The line is forced to intercept the point (0, Pmax(STC)). The results for BiFi, PmaxBiFi10 and PmaxBiFi20 from equations (6) and (7) are presented in Table 2. 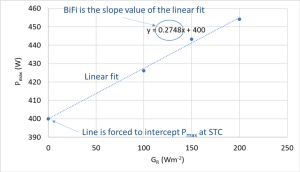 Figure 7: Graph of Pmax as a function of GR, for calculation of the BiFi parameter, by the slope of the linear fit line for the measured points. The line is forced to intercept the point (0, Pmax(STC)

Table 2. the values of BiFi, PmaxBiFi10 and PmaxBiFi20 calculated for the example

Some specific steps of the above methodology have to be highlighted: