The DSR-method is a spectral method using quasi monochromatic light as a light source. Hence, for this method a reference is needed with calibrated differential spectral irradiance responsivity. This could be a reference solar cell or a photodiode. The optical setup of a DSR-facility is typically built up the following way: A white light source such as a Xe arc lamp or a halogen lamp is coupled into a monochromator system that selects the desired wavelength. Following the monochromator there is an optical chopper that modulated the monochromatic light with a given frequency f. Subsequently the monochromatic light passes an imaging optics that generates a uniform irradiance distribution in the measurement plane. Within this optics there is a beam splitter that couples a fraction of the monochromatic light onto a monitor photodiode. Finally, there are white light bias lamps that can generate a bias irradiance between 0 – 1100 W/m² in the measurement plane additionally to the monochromatic irradiance. The DUT and the reference must be temperature controlled and kept at 25°C. Both reference device and DUT shall be connected to a transimpedance amplifier, that coverts the currents into voltages and keeps the solar cell in short circuit state. The AC modulated voltage generated by the monochromatic spectral irradiance shall be then measured by a Lock-In amplifier, the DC voltage generated by the bias irradiance shall be measured by a calibrated multimeter. Also the Monitor current should be converted into a voltage using a shunt or a transimpedance amplifier and measured by a Lock-In-amplifier. The calibration procedure would be as follows:

Spectrally resolved (wavelength ), the differential spectral irradiance responsivity [math]\displaystyle{ \widetilde{s}(\lambda , E_{b}) }[/math] provides the basis for the calculation of the quantities to be calibrated, taking prescribed standard test conditions (index STC) into account. It is determined by spectroradiometry in accordance with the DSR method (differential spectral responsivity method).

The DSR method is a two-beam procedure and makes simultaneous use of:

a) The values of the two-dimensional function of the absolute differential spectral irradiance responsivity [math]\displaystyle{ \widetilde{s}(\lambda,I_{sc}(E_{b})) }[/math] are determined by

c)  The associated value of the short-circuit current under standard test conditions ISTC = ISC(ESTC) is obtained in accordance with the following formula by approximation of the upper integration limit ISTC so that the value of the integral furnishes the irradiance .

An integration of the reciprocal of the function of the differential irradiance responsivity [math]\displaystyle{ 1/\widetilde{s}_{AMx}(I_{SC}) }[/math] assessed in accordance with AMx, via the short-circuit current ISC up to the measured value of the short-circuit current ISC(Eb) as a solid upper integration limit furnishes the value assessed in accordance with AMx of the associated bias irradiance

As outlined in the previous section, the basic measurant is two-dimensional function of the absolute differential spectral irradiance responsivity, since all other quatities such as the value of the short-circuit current under standard test conditions and the function of the absolute spectral irradiance responsivity is determined under standard test conditions is derived from it mathematically only.

In the following section the model equation for the determination of the absolute differential spectral irradiance responsivity is described.

Since the device under test (DUT) and the reference (Ref) are measured subsequently the monitor principle shall be applied in order to correct for the drift of the quasi-monochromatic irradiance between both measurements. For that purpose a fraction of the quasi-monochromatic irradiance is coupled onto a monitor detector (i.e. a photodiode). The current measurement of the monitor detector must be measured synchronized in time (i.e. by a triggered measurement) with the corresponding DUT or Ref measurement.

cR(λ):               correction function related to the amplifications factors of the current voltage converters connected to DUT, Ref and the monitor detector.

cnon-u(λ):          correction function related to the non-uniformity of the monochromatoc light field.

cdist:                 correction factor related to the alignment of the reference planes of DUT and Ref

cshadow:            correction factor related to shadowing of the active area of DUT and Ref, i.e. by contacting bars.

These correction factors need to be determined and applied in order to determine the correct calibration value for [math]\displaystyle{ \widetilde{s}^{DUT}(\lambda , I_{b}) }[/math].

Figure 1 shows an Ishikawa diagram of all identified sources of uncertainty for the determination of [math]\displaystyle{ \widetilde{s}^{DUT} (\lambda , I_{b}) }[/math]. Each of these components affects the result of the measurement in a specific way, which can mathematically be expressed by a multiplicative f -factor: 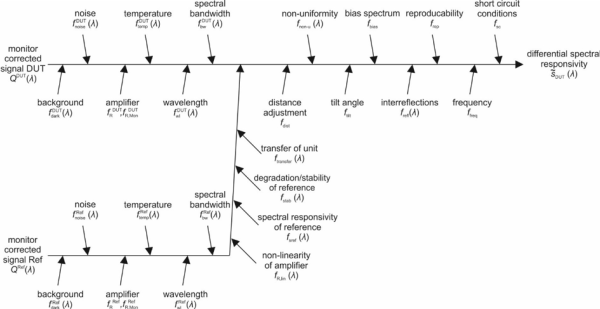 Figure 1: Ishikawa diagram of all sources of uncertainty for a DSR measurement.

These f-factors are as follows and shall desribe the following sources for uncertainty:

All these sources of uncertainties have to be evaluated and quantified.

The Laser-DSR facility applies the abovemention DSR calibration procedure for WPVS reference solar cells. The model equation is applied to the measured data in order to determine the values of the two-dimensional function of the absolute differential spectral irradiance responsivity shown in Figure 2: 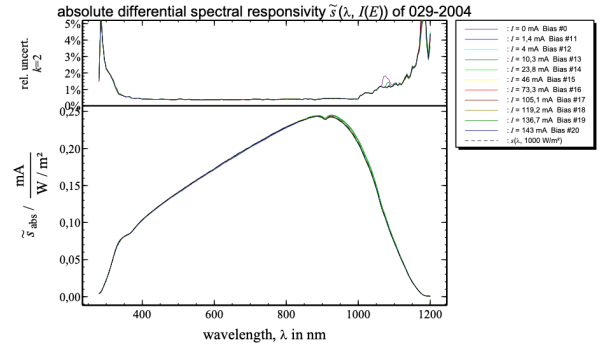 All of the abovementioned sources of uncertainties were carefully evaluated for this facility, quantified and applied in the uncertainty analysis based on a Monte-Carlo approach. An example compilation of these uncertainties is shown in Figure 3. 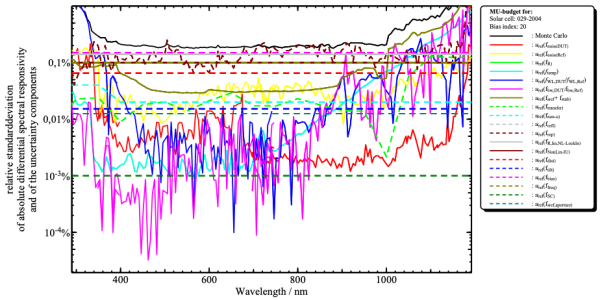 Figure 3 : Uncertainty contributions of a DSR measurement at LDSR-facility.

Within the scope of the 19ENG01 Metro-PV  project “Metrology for emerging PV applications” a documented method for the traceable calibration of WPVS cells with an uncertainty of 0.35% using the laser-based differential spectral responsivity method was developed. The laser-based DSR setup at PTB for the primary calibration of reference solar cells was technically improved by improved fibre coupling, better amplifiers for the monitor device, improved cooling of bias lamps and usage of better reference spectroradiometers. An in-depth analysis of the transfer uncertainties from the primary reference photodiode to the solar cell (non-uniformity, stability, linearity) which lead to reduced transfer uncertainties.

A thourough model equation including a compilation of all sources of measurement uncertainties was developed and applied to the calibration procedure. Finally calibration of WPVS reference solar cells were performed resulting in expanded uncertainties of 0.35% (k=2) for the short circuit current at standard test condition.