The measurement of the current-voltage (IV) curve is one of the key elements to characterize the performance of solar cells and modules. To provide comparability between measurements at different laboratories, specific idealized conditions for the measurement of terrestrial solar devices have been defined in the international standard IEC 60904-1 [1]:

These specifications are also known as standard testing conditions (STC). The air mass coefficient thereby specifies the optical path length through the atmosphere. AM1.5 for example stands for 1.5 times the thickness of the earth atmosphere and corresponds to an inclination angle of 48.1° to zenith.

Figure 5 (a) shows a typical IV curve and Figure 5 (b) shows the corresponding power-voltage (PV) curve of a silicon solar cell. For the measurement of the curves, it is important that the number of measured current and voltage points is sufficient to reproduce the form of the entire IV curve. 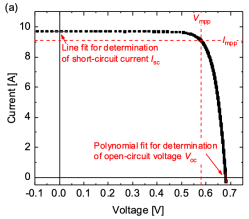 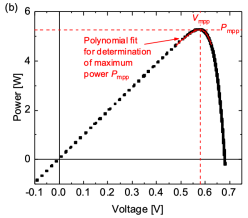 Figure 5: (a) current-voltage (IV) and (b) power-voltage (PV) curve of a silicon solar cel. measured indoors at a solar simulator.

Usually, the following parameters are determined from the two curves:

There are different ways to determine the IV characteristics of solar devices. These can be measured outdoors with natural sunlight or indoors with solar simulators.

Figure 1 shows a typical facility for outdoor measurements at STC. Outdoor measurements shall be performed at clear and sunny days without clouds around the sun with diffuse component of illumination below 30 %. For tracking the irradiance onto the solar device under test, reference solar cells (see module 1, lesson 3) or modules shall be installed in plane to the device under test and as close to it as possible. As the IV characteristics of these reference devices are known and they exhibit a linear response to irradiance, the irradiance onto the device under test can be determined. As alternative to reference cells and modules, pyranometers can be used which directly detect total irradiance. For an accurate measurement of the IV curve of the test device, the irradiance shall be stable within ± 1 %.

To reduce measurement errors coming from different spectral responsivities of test and reference device –i.e. different sensitivities to the different wavelength ranges of the spectrum–, it is important to use reference devices which spectrally match the device under test. If this is not possible, a so-called spectral mismatch correction can be carried out [2], which additionally requires the measurement of the spectral irradiance distribution of the sunlight by spectroradiometers.

For the measurement of the IV curve, the voltage needs to be swept through from 0 V to open-circuit conditions and the resulting current shall be measured. Concurrent readings of voltage and current of the test device as well as the output of the reference device shall be made. The temperature of both reference and test devices also need to be recorded once during the measurement process. 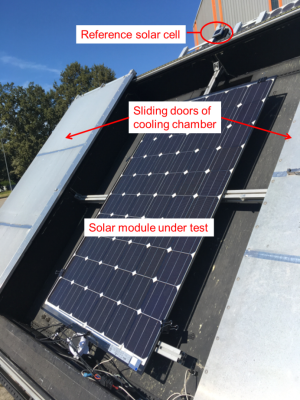 Figure 1: Picture of one of the outdoor measurement facilities of the European Solar Test Installation (ESTI) located at the Joint Research Centre (JRC) in Ispra, Italy. A reference solar cell is installed over the module to record the incoming irradiance. The temperature of the module can be regulated to 25 °C by a cooling chamber, whose sliding doors can be shut to shadow the module against sunlight. Due to thermal inertia, the module stays at temperatures around 25 °C for few minutes after opening the sliding doors. In this time, the IV curve can be measured

Often the actual temperature or the total irradiance onto the device under test are different from STC and have a significant impact on the measurement results. This can be the case if

For these cases, several correction procedures can be applied to translate the measured IV curves to STC. It is however recommended to keep these corrections as small as possible, as they will reduce the accuracy of the measurement result.

Indoor measurements are most often performed by solar simulators, which provide illumination that approximates natural sunlight. A schematic of a solar simulator for the measurement of solar cells is shown in Figure 2. It consists of a light source which is very often a Xenon arc lamp. A reflector around the light source guides and parallelizes the light toward the sample. Spectral filters are introduced into the light path to approximate the AM1.5g spectral distribution as closely as possible. Additional optical components like lenses or scatter filters are implemented to improve the homogeneity of the irradiance in the test plane. As an alternative to Xenon arc lamps, solar simulators with arrays of light-emitting diodes (LEDs) are recently entering the market. 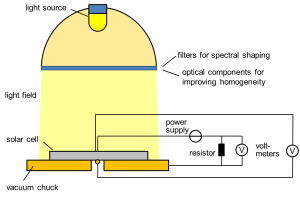 Figure 2: Schematic of a solar simulator with a Xenon arc lamp for measuring the IV characteristics of solar cells under illumination

Light sources can either be operated in steady-state mode with continuous illumination or in pulsed mode with short, flash-like illumination of few ten to several hundred milliseconds. The quality of a solar simulator is assessed by three different criteria:

The more sophisticated the setup, the higher the accuracy of the measurement. Most calibration laboratories apply simulators of classification AAA, which is the highest classification. Further information on the rating of solar simulators has been introduced in module 1, lesson 2.

For measuring the IV curve of solar cells, the cells are generally mounted on vacuum chucks, which often contain an active cooling and heating unit to precisely regulate the solar cell temperature to 25 °C. This is particularly important for steady-state simulators, which exhibit a significant heat transfer to the cell. By suction of the solar cell to the vacuum chuck, good thermal contact between cell and chuck is established.

To be able to measure the IV curve, contacts need to be applied to solar cells or modules in four-wire mode. That means that separate, electrically isolated contacts for current and voltage measurements have to be realized at both positive and negative contacts. This way, the contact resistance between the contacts and the solar device as well as the resistance of the cabling does not contribute to the measurement. Figure 3 shows a typical front contacting unit for a bare silicon solar cells. 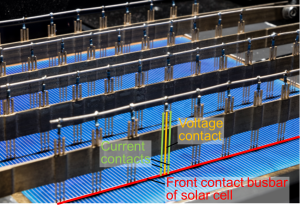 Figure 3: Unit for contacting the front of silicon solar cells. Current and voltage contact pins are electrically isolated from each other to enable four-wire measurements

For the measurement of the IV curve, the voltage needs to be swept through from 0 V to open-circuit conditions and the resulting current needs to be measured. There are different possibilities to realize voltage sweeps: by variable resistors, by capacitive or electronic loads, by DC-DC converters or by power supplies [3].

Figure 2 exemplarily shows a sun simulator using a four-quadrant power supply. The power supply can thereby either provide or dissipate power and thus defines the operating point on the IV curve. This way, also measurements of the reverse characteristics with negative voltages are possible. The current generated by the solar device is measured by a voltmeter, which detects the voltage over a resistor of well-known resistance. A second voltmeter directly measures the voltage between the front and rear contacts of the solar device.

For the measurement of the IV curve, concurrent readings of voltage and current shall be recorded. The procedure for sweeping the voltage can in principle be applied to both steady-state and pulsed solar simulators. However, measurement artefacts can appear for short pulse lengths: Changing the voltage of the solar device leads to a change in the charge carrier distribution in the device, which can be understood as changing the charge condition of a capacitor. As this process passes with a distinct inertia, very fast voltage sweeps can lead to hysteresis effects for high-efficiency solar devices with high diffusion capacitance [4]. Forward and reverse voltage sweeps thus exhibit different IV curves, see Figure 4. To mitigate this measurement artefact, multi-flash methods can be used, for which the IV curve is measured in segments by several flashes. Alternatively, advanced evaluation methods have been developed, which directly model the capacitance of the solar device and correct the IV curve for the artefact. 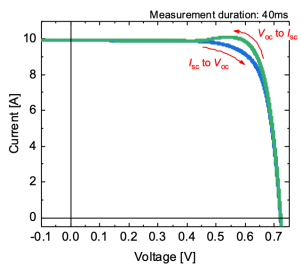 Figure 4: Current-voltage curve of a high-efficiency silicon solar cell with high diffusion capacitance measured with a solar simulator with pulsed illumination. Due to the short measurement duration, the IV curve shows a strong hysteresis with a large deviation between forward and backward sweep directions.

The price of solar cells and modules is most often determined by their power and efficiency, respectively. The more precisely the power or efficiency are measured, the more precisely the revenue of solar cell and module production lines is known. For example, already measurement uncertainties of only 3.0 % –passed to the yearly worldwide solar cell production of 2018– lead to budget uncertainties in the three hundred-million-dollar range.

To increase the accuracy with which IV parameters are determined, calibration laboratories as well as measurement facilities of production lines spent much effort in improving the quality of the measurement setups. The goal is to minimize uncertainty contributions coming from uniformity of irradiance and temperature, spectral mismatch between reference and test devices, capacitance of reference and test devices, uniform contacting and temporal stability of the measurement. Where possible, correction methods are applied to further reduce the effect of uncertainty contributions. This way measurement uncertainties for power and efficiency can be reduced from several percent to low values in the range of 1 to 2 %rel.