The proportions of direct and diffuse contributions to solar global (horizontal) irradiance are governed by the solar elevation angle (the sun vertical position above the horizon) and the weather. PV modules operating outdoors are fixed optimal tilted angle, to maximise incident irradiation on the modules over the full year. This is typically 10-20° lower than the site latitude, depending on climate. Since the diffuse component is much weaker than the direct, the impact of the view-factor reduction in incident diffuse radiation on the module plane due to this orientation is not significant. Tilting the module from the horizontal does however introduce a third influence on the direct/diffuse ratio – the angle of incidence of the sun to the module.

Figure 1: Schematic of optimal orientation angle of a PV module operating outdoors and seasonal sun path geometry with respect to a point on earth at a latitude of about 50° N [1]

The optimal orientation of a PV module is generally when the surface of the modules is perpendicular to the direction of the direct beam (irradiance incident at 0). Careful calculation of the optimal angle, incorporating sun path information and typical weather patterns, maximises the overall annual in-plane irradiation. However, the apparent sun position varies continuously and as the angle of incidence (AoI) increases, the efficiency of a PV module decreases due to the increased reflection. The impact of angular losses in PV module performance over a long period of time, i.e. energy yield, can be significant [2], therefore the incorporation of this effect in the performance calculation is crucial and it is also included in the IEC 61853-2 standard [3]. Outdoor angular response measurement methods is more advanced than that of indoor methods due to the limitations of simulated light sources (particularly collimation for large areas). The application of the ideal natural sunlight allows for the measurement of angular response characteristic of large area PV devices without the concern of reduction in irradiance uniformity even in tilted orientations. A typical indoor measurement method employs a light source that is far from ideal regarding the angular distribution of the light beams, which results in high volume non-uniformity in the setup.

The angular response of an ideal optical device is described by a cosine response; its response is proportional to the cosine of the angle of incidence [4]. The angle of incidence dependency of PV module performance is influenced by the combination of cosine effect and additional optical losses due to the orientation of the modules with respect to the light source, predominantly angle dependent reflectance. The angular response characterisation of a PV device measures its current response at various angles, which is dictated largely by the optical properties of the outer glass used in the device, but may also be affected by internal layers in front of the PV active components. This is calculated by normalising the measurement of short-circuit current at different AoI (𝐼𝑠𝑐 (𝜃)) to that when the AoI is 0° (𝐼𝑠𝑐 (0°)). The cosine effect in the measurement is removed by dividing the normalised short-circuit current measurement by the cosine of AoI (cos 𝜃)(1): [math]\displaystyle{ \tau\left(\theta\right)=\frac{I_{SC}(\theta)}{I_{SC}\left(0^o\right)\ cos\theta} }[/math]

A perfectly collimated light is ideal in the application to angular response characterisation to eliminate the error in the measurement due to light divergence. In the application to PV measurements, this effect will cause variations in the AoI across the DUT even in “normal” position. Further to this, as the device is rotated the intensity of light will also vary between the parts of the device closer to the light source and those further away. In practice, having a perfectly collimated light source is not possible for a full-sized module area measurement setup employing a solar simulator, therefore the magnitude of the uncertainty contributed by this effect has to be incorporated in the measurement.

For outdoor measurements, it is necessary that the measurement takes place when the sky is clear to ensure so far as possible that only the direct normal irradiance (DNI) is used in the measurement. The solar DNI is the closest to a perfectly collimated light, considering the very large distance to the light source, approximately 149 million km away.

An accurate adjustment of tilt angle is crucial. A goniometric stage is usually employed in the angular response measurement setup to introduce controlled variation of AoI for both indoor and outdoor measurements. In the case of indoor measurement, the DUT is typically fixed to the centre of the stage, aligned to the centre of light source so that the AoI shift will be symmetrical in both directions (normal to +90°/normal to -90°). The thickness of the DUT also has to be taken into account while making this adjustment, to make the axis of rotation pass through the front surface.

The standard indoor measurement procedure outlined in the IEC 61853-2 is rather simple. It requires the ISC measurement of the DUT to be taken at two orthogonal angular directions relative to the normal of the DUT for cases where rotationally asymmetric behaviour of the module is observed. For this, the application of a high precision rotation stage with symmetrical rotation is crucial.

The AoI is varied in 10° steps between -60° to +60° while 5° step increment is recommended outside this range due to the higher rate of optical loss experienced by the DUT at high AoI. Variation in the temperature of the DUT is monitored for stability throughout the measurement to remove the need for temperature correction. The angular transmission of the DUT at each AoI is calculated using (1). 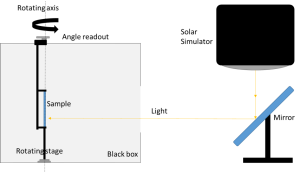 Figure 3: Schematic of the experimental layout for angular response measurements of small samples

Indoor measurement layouts can suffer from high irradiance volume nonuniformity when measuring PV modules, as a result of employing a non-perfectly collimated light source. Irradiance non-uniformity especially in the z-axis (optical axis from light source to module) is significant at high AoI when the horizontal edges of the DUT are moved closer to/further from the light source relative to its centre point. The influence of non-uniform irradiance is prominent in the case of electrical measurements of large area PV modules. For modules of series connected cells with bypass diodes, the I-V characteristic is affected by the least performing cell within each bypass-protected block. Figure 3 shows an exaggerated schematic of the angular response measurement of a typical commercial c-Si PV module with 3 strings (3 bypass diodes) using an extended light source. At higher tilt angles (e.g. 60°), the bottom half of the module is moved closer to the source with respect to the rotation point in comparison to the top half. This results in 3 steps observed in the I-V characteristic measurement which correspond to the distance of the string to the light source and the resulting differences in photocurrent generation.

The non-uniformity effect in the z-axis can be reduced by restricting the electrical measurement to an individual cell within the module instead of the entire module. This can be achieve by the following methods:

Figure 5: Experimental results of angular response measurements, on the left for various PV cells and on the right for two different PV modules [1]

Most of the above considerations apply also to larger devices, with the following additional notes: